To those of you who are already into photography quite a fair bit, you probably already know the term “Golden Hour”.
When the sun is rising or the sun is setting, you usually get the best and warmest light for landscape or cityscape photography. Basically any kind of outdoor shooting that is supposed to have warm light is best shot during these golden hours.

Just today I was working away, when I checked a little while before the sun began to set, whether the sky was clouded or not. When it wasn’t, I immediately grabbed my gear, ran outside, set up the tripod on the location I wanted to shoot at a couple of days ago and waited.
After some time passed by, the sun just barely touched the horizon, so I used my remote trigger to start a bracketing sequence, shooting 3 pictures in a row. One was underexposed by -3 EV, one at normal exposure and one overexposed by 3 EV. This way I could later create the HDR picture that you can see below on the left side.

However, after processing the HDR, the whole scenery was rather evenly exposed. I like to use the HDR settings careful as my pictures shouldn’t have that typical HDR look. I tend to use HDR only if I can’t get enough dynamics into the picture without it. My main problem, however, was that the HDR processor (Photomatrix Pro) like any processor tries to balance out the colors nice and evenly.
Usually that would be a good thing, yet I wanted to reproduce exactly what I saw (and what I mostly captured in my 0 EV picture, yet with too little dynamic range). Also my FZ200 is quite a decent camera, but in extreme light situations (direct sunlight from the front) it will create some CA (chromatic aberration, the color fringing on some edges). So I had to correct for that with Photoshop and eventually adjust my colors to give me that nice and warm look the situation had at the time of shooting.

After some work, correcting CA, color correction, removing some lens flare and contrast adjustments, I had the final picture that you can see on the right.
If you click on the pictures, it will take you to flickr where you can see the full size version as well as the EXIF information. 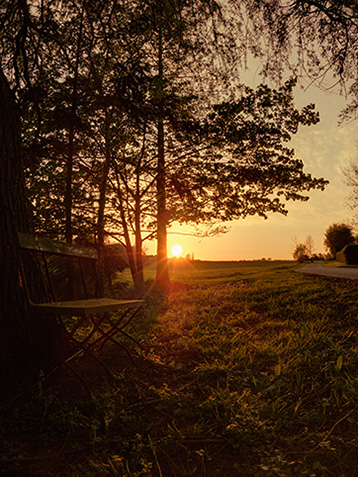 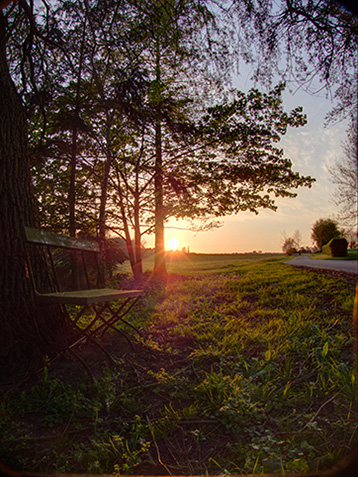