Today I had my first band shooting with Open Water Collective. A friend of mine, Emily, asked me if I could do something that was a little different from usual band photos. Often you’re outside with the band, in abandoned places, fields, skate parks or similar where the band is posing. But they had a very particular idea in mind: having waves projected onto them infront of a big screen.

Fortunately I do own a projector and a sufficiently large screen, hence we could give it a try. Although I was somewhat skeptical, as we started the shoot and I experimented a little with different wave pictures (that I ended up editing, so the waves do not appear as strong on their faces), the initial results were surprisingly good.

A number of shots later we had the band arranged in a sastifying manner, the wave picture edited properly to fit the height of everyone and took some more shots. The projector was turned down in terms of brightness, so they wouldn’t have to squint. That however made the whole scene darker than expected, so despite the projector it was almost shooting in low light. I bumped up the ISO to get a decent shutter speed and that was alright to get some sharp shots. I still had to combine 3 pictures in the end to achieve the look that I wanted and to have everyone look as they wanted. Then just some minor Photoshop magic, cleaning up, removing shadows from the screen, de-noising, removing reflections on the glasses and that’s it. 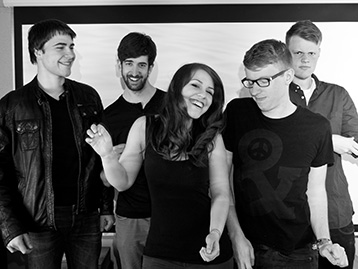 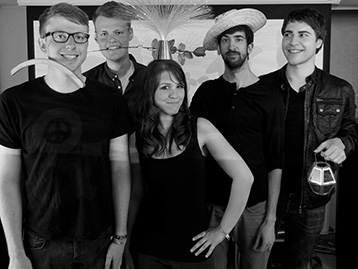 After the “work” was done and the main picture as well as the individual wave pictures had been shot, they were just having some fun in front of the camera. You can really see that those guys not only love to make music together, but are also a group that is having fun together in any situation. 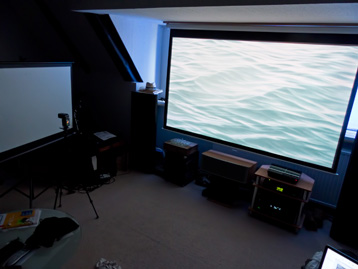 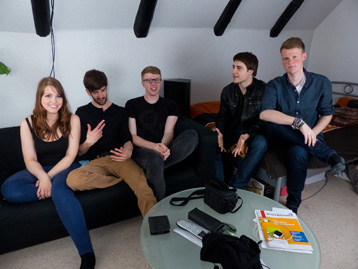