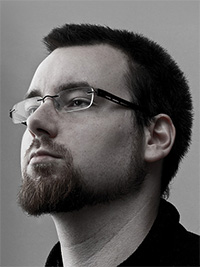 I am the oldest of 5 children, now married for 10 years to my wonderful wife Stephanie.
I started playing drums every now and then in 2004 and finally on a regular basis in 2006. I’ve played a number of gigs with different bands since then, ranging from 20 to 1000 people in the audience, but I’d never go professional.

I have been photographing for quite some time now, but mainly with compact cameras. Only since the middle of 2012 I started using more sophisticated equipment and looking into photography  seriously. Once again, that is a hobby, so as of now I have no plans to do this professionally.

My passion in terms of earning money is clearly programming. I have been doing that for as long as I can remember, thanks to my father. I’m a freelancer since 2010 and I do like the flexibility the most. That is what allows me to travel a couple of times a year.

Mainly I decided to pick up photography again when I started travelling more frequently (since early 2009). When you are flying all around the globe, you simply want to make memories, so most people would start taking pictures.
But soon after, I started to really enjoy taking pictures – while at the same time becoming much more critical of my shots.
At that time I began experimenting more, composing pictures, eventually upgrading my camera to a Sony HX5V, so my equipment could keep up with my developing skills. A few years later, in 2012, I realized more and more how the camera was once again limiting me to grow as a photographer. So once again I made a switch, this time to the Panasonic FZ200.
The Panasonic camera is a superzoom camera, so it is still rather small, but I can handle it all manually, it allows an external flash to be attached, I can use bracketing and a variety of other features that are used in professional environments.

Now I started really getting into photography, reading books, going out to snap pictures every other day and trying out new techniques, subjects, setups and a variety of different shooting styles. Whether it’s nature, macros, portraits, concerts, events, bands, weddings, … I covered all of it already. And it is great fun.
But one thing I learned on the way: you’re never “done”. You keep learning, keep figuring out new techniques, improve on the techniques you already know and have to always strive to improve both yourself and your pictures.

Of course I’m a tech nut and I wouldn’t be myself if I wouldn’t also dig into the technical aspects behind photography. That also includes all sorts of different cameras, lenses, flashes, light modifiers, adapters, setups and more.

My computer history in words…Top

If you are still curious for more, let me tell you a little about myself.
Thanks to my father who has been working in the computer industry since about 1980, I was able to make contact with computers at an early age, even before going to school.
Not only was I able to use his PC, but he even gave me my own PC soon after – outdated but completely operational. This allowed me to make contact with DOS and QBasic, which I would use to write my own simplistic games at the age of 10 in early 1998. A year later I got permanent access to the internet through a fiber connection.

Around the same time I encountered Microsoft Frontpage and began creating my own websites. Furthermore I occupied myself for quite some time with Visual Basic, as I also enjoy writing desktop applications. Nonetheless, I still focused on developing websites and kept improving my skills. In late 2001 I joined a website called rockwall.de before its launch, which was where I came into contact with Perl and PHP. A friend and good programmer, Jan Kopcsek, helped me to get into PHP4 and MySQL in late 2002 for about half a year. Ever since then I developed my own scripts – often with goals that were ridiculous and seemed unachievable at first, but they taught me valuable lessons on the way.

My PHP experience was growing and when I had my internship at the MDC GmbH (who were specialists in MSSQL and ColdFusion back then), I experienced for the first time how professionals work. And to my surprise, when it came to PHP, I was able to keep up with them, despite my age. When I finished the task I was given for my 3 weeks internship in just about 2 days, I was offered to work there part-time. I did so for about 6 months – until I decided it was time to move on. I knew HTML and CSS, but that wasn’t enough anymore, so I started to learn new technologies like JavaScript, XML/XSLT, Flash and more.

Over the course of the next couple of years, I helped large communities to move away from HTML sites to my own Content Management System. I never paid much attention to school, enough to achieve good grades (B average), yet my mind was set on programming. From 11th grade onwards I started working part-time in my new school, administrating a network of about 100 computers and thus getting an in-depth understanding of networking and administration of Windows, Linux and Mac OS.

Between 2006 and 2007 I have spent more than a years time in southern Spain. Living there really changed my mind, because I didn’t think I could feel at home anywhere else than my hometown – but to my surprise I could. This could very well be considered the starting point of me traveling the world, working on projects and actually earning money with it.

In 2007, back to Germany, I enrolled into school again so I could continue my studies. I graduated in 2010  and became a freelancer, which I am still until today.

The past years have been by far the busiest – I could probably fill a whole book with it. I have travelled around Europe and South East Asia many times, made so many new experiences, met a lot of interesting people, picked up photography, played a number of concerts and most importantly: I got engaged and married to my wonderful wife. This is not where my story ends, it is where it really begins.

I’m not sure what awaits me in future, but I will embrace it together with my wife. We have been together for 17 years now – and I have since grown inseparable with her. She gives me the strength I need, so I can focus on my work and we can pursue our dreams together.